Stream temperature is an important water quality attribute in many of California’s streams, especially those that support cold-water fisheries such as trout, steelhead, and salmon. Several fish have been identified as threatened or endangered, and elevation of summer stream temperatures is often cited as a cause. Activities such as streamflow diversion for irrigation of pastures, return of warm irrigation runoff to streams, and reduction in riparian canopy cover due to logging and grazing can increase stream temperatures. We are actively investigating the factors which control stream temperature and how management may, or may not, influence these factors on rangeland watersheds. 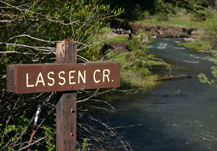 The objective of this project was to provide guidance and explicit examples of how to graphically and statistically analyze and interpret watershed scale stream temperature data. We utilize a comprehensive dataset of stream temperature, air temperature, streamflow, streamside vegetative canopy, and solar input collected during the summers of 1999-2001 across the Lassen and Willow Creek watersheds in northeastern CA.

2) determination of temperature changes above and below a land use activity, through a given property or stream reach, or along an entire stream network

3) examination of watershed specific associations between stream temperature and factors such as air temperature, streamflow, and riparian canopy cover. 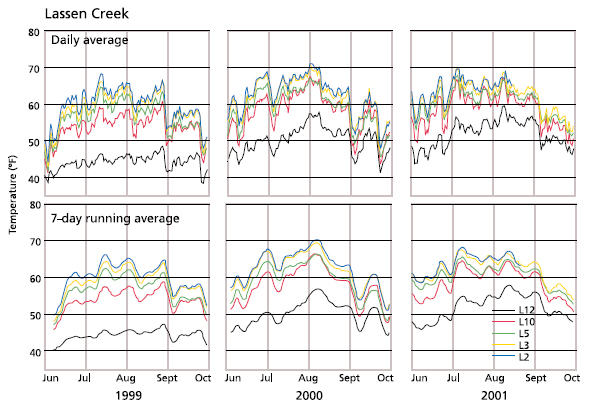 In the first paper from this project, we have demonstrated some display and graphical analysis approaches by which data collected in typical stream temperature monitoring projects can be interpreted by and presented to land managers, watershed groups, and other interested parties.

This approach is simple and non-statistical, facilitating timely local analysis to provide sufficient information to achieve several common monitoring objectives. This approach allows for evaluation of stream temperature across a watershed for comparison to temperature criteria, and identification of watershed areas with high or low rates of stream temperature gain. This level of analysis can translate large raw datasets into information for local managers and water resources agencies to identify and prioritize allocation of limited resources for restoration and improvement of management practices relative to stream temperature reduction. View supporting research>> 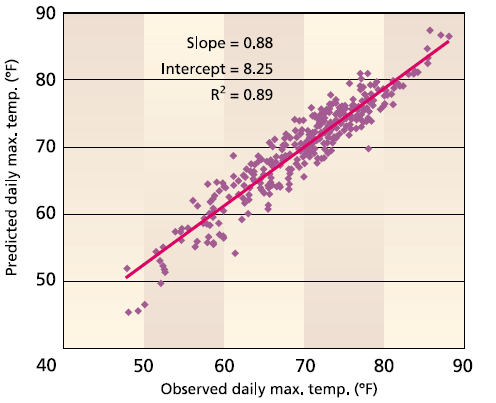 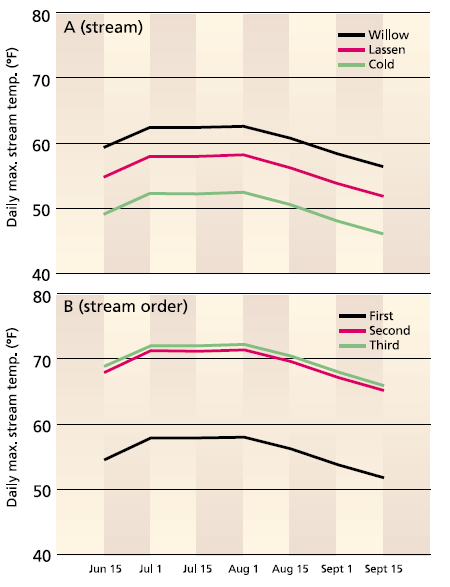 In the second paper from this project, we provide specific guidance on how to statistically determine relationships between stream temperature and factors such as streamflow, riparian canopy cover, air temperature, and watershed position. On a watershed or regional scale, information about the relationships existing between stream temperature and such factors are important to identify and quantify the expected benefits of practices to reduce stream temperature. In order for monitoring data to be interpreted and integrated into restoration plans, regulatory processes, and land use management decisions there must be appropriate collection and analysis of that data.  It is important to examine and plan for data analysis options during the initial development of the monitoring plan prior to data collection, not only after the data has been collected. While most individuals and groups planning and conducting monitoring may not have the statistical expertise to conduct the analysis described in this paper, there is statistical analysis support available within many of the state and federal agencies and organizations to assist with monitoring plan development, implementation, and analysis. View supporting research>>

Native trout species, such as the redband trout, occupy thermally harsh stream habitats in hot, arid rangeland basins of the western United States. Declines in the distribution and abundance of these species has generated interest in understanding how these cold water species survive in these systems, as well as in identifying opportunities to restore these species to their former ranges. The purpose of this study was to assess the potential for thermal stratification to provide thermal refuge for redband trout in stream pools characterized by warm intermittent flow conditions on arid rangelands. We studied vertical thermal stratification in two pools during three summers on Boles Creek located on the Modoc Plateau in extreme northeastern California. Water and air temperature data were collected on a 0.5 hour time step from 15-Jun through 15-Sep during 1996, 1997, and 2000 using commercial temperature data-loggers. Water temperature was measured at the top (0.3 m below pool surface) and bottom (0.3 m above pool substrates) of each pool. 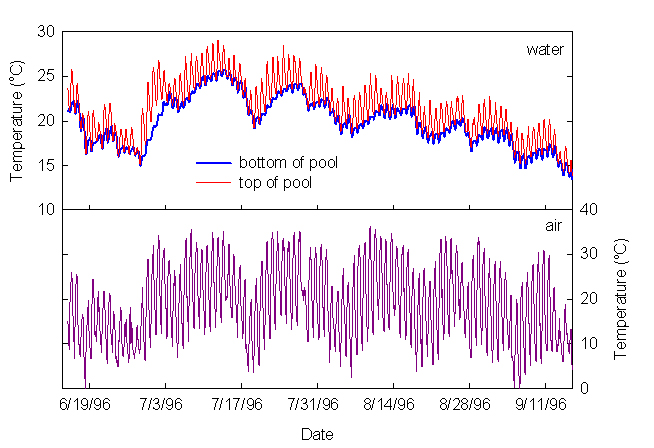 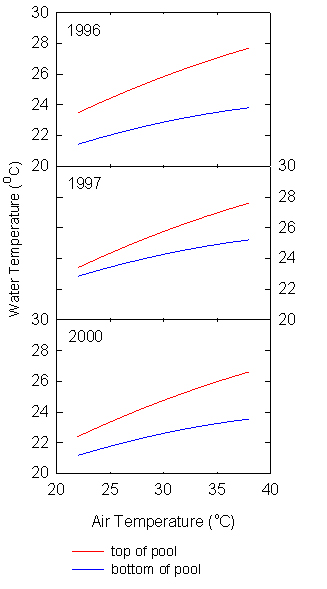 The thermal regime in the study pools was often near the upper lethal limit reported for redband trout, but temperatures at the bottom of these pools did offer refuge from lethal temperatures realized near the pool surface. Temperatures at pool bottom were consistently above optimal levels published for redbands. View supporting research>>

Elevated water temperature can be a problem for sensitive species in many coastal river systems in northern California. Coho salmon (Oncorhynchus kisutch) and steelhead trout (O. mykiss) are specific salmonid species of concern, and agencies have established target temperatures for many river systems in the region. These targets are based upon expectations of water temperature reduction by increased tree canopy cover above and near stream. Habitat restoration and species recovery strategies are being implemented to increase riparian tree canopy cover. 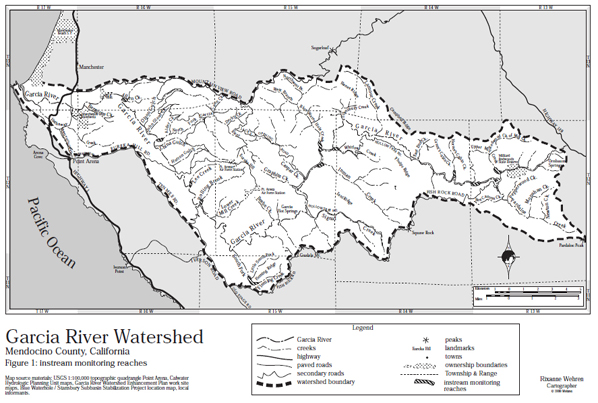 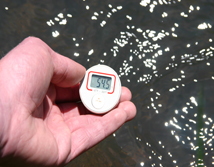 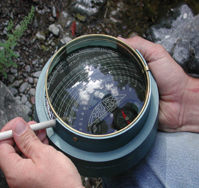 In hot, arid, inland watersheds we know that tree canopy cover interacts with watershed and stream reach scale factors such as air temperature to determine water temperatures (Tate et al. 2005 download = cal ag stats). On coastal watersheds in northern California, we hypothesize that the summer time marine air mass intrusion is a major determinant of stream temperature and modifies the effect of canopy on water temperature at the watershed scale.

To test this hypothesis, we monitored temperature at 6 air and 42 stream locations throughout the watershed from May through September 2000. Temperature measurements were made every 30 minutes using recording data loggers. Linear mixed effects regression analysis was used to quantify relationships between water temperature (MWAT and MWMT), air temperature, marine air intrusion, stream order, and tree canopy cover over monitored stream reaches. For more information on our approach to statistical analysis see Tate et al. 2005 and Project 1 description above. 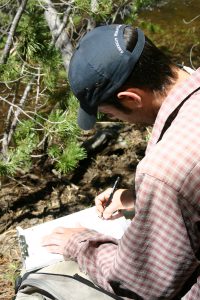 Air temperature was lower in the marine influenced zone of the watershed compared to the inland zone.

The maximum elevation of marine intrusion was about 600 ft above mean sea level, making roughly 30% of the watershed “marine zone” and the remainder “inland zone”. Streamflow was greater in the mainstem Garcia River than in tributaries and declined rapidly as summer progressed. 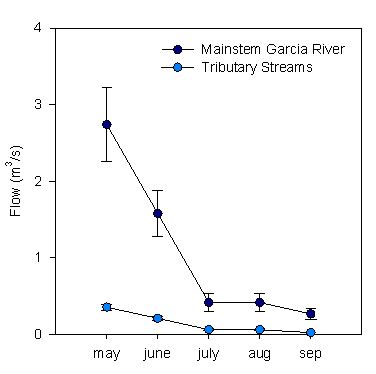 Stream temperatures were consistently warmer in the inland zone of the watershed compared to marine air influenced zone at both the tributary and mainstem scales. 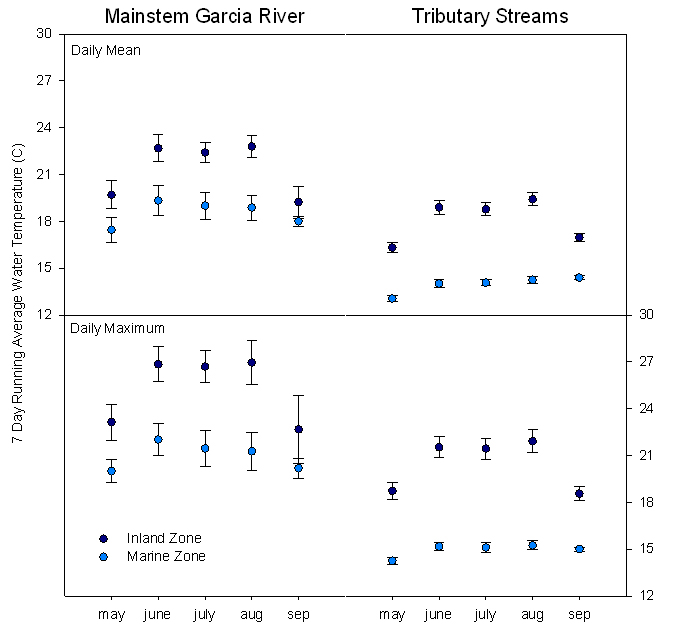 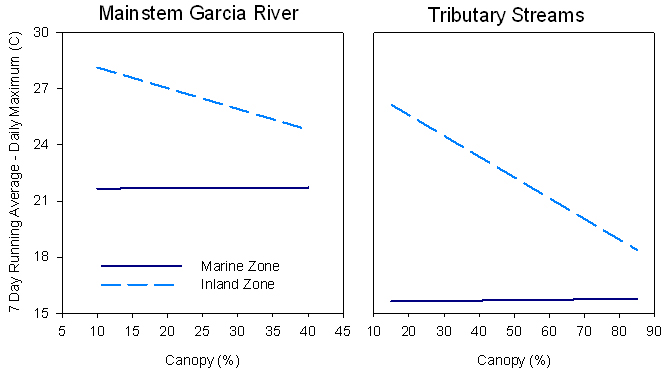