Considerations for Feeding Rained on Hay 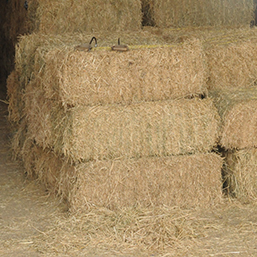 The series of storms this spring across Northern California was welcome on rangelands during the continuing drought.  Although these storms helped rangeland managers, the rains made for some risky decisions on timing hay cuttings – resulting in a lot of rained-on hay. As every rancher knows, this can lead to a lot of hay on the market with various levels of mold.

Although moldy hay can be inexpensive to buy, it may result in expenses later. Mold that grows on rain damaged hay can cause feed avoidance (and so wasted $ spent on purchasing the hay), sub-acute toxicity (sick livestock) and even acute toxicity (death). Here are some important points to consider about moldy hay….

Generally the mold itself does not make cattle sick.  It is the toxins created by some types of molds that are the culprits.  Molds that do not create toxins are not particularly dangerous to cattle, although they may still result in feed avoidance. While drying hay in the sun stops mold growth, the toxins and not impacted and can still be a threat to cattle if consumed.

This is presumably due to learned behavior that mold makes them sick. In the case of bales with moldy exteriors, they will generally avoid exterior hay in favor of the center of the bales. The center is less moldy due to a lack of oxygen and moisture.

Hunger may overcome the cattle’s’ learned avoidance behavior and result in overconsumption of mold and toxins.

This is because animals can no longer easily avoid moldy hay and thus toxins. However, this can also reduce risk by diluting the molds in the total diet consumed.

It is not difficult or expensive to send hay samples to the lab for mold count analysis. There are guidelines (see below) on how much risk is associated with feeding moldy hay based on these counts. It is assumed that the higher the mold count the greater the likelihood that there will be toxins. While the actual mold species can be identified this is expensive and may only identify some of the dangerous molds.  In other words if the molds are identified that are known toxin producers it does not mean that they produced molds and a toxin producing mold could be missed and so its toxins could be present.

Below is a 6 tier risk scoring system based on mold counts. This is useful when feeding total mixed rations where cattle selectivity is very limited. It is also useful when the diet is primarily hay.

If abnormal symptoms are observed, then access to the feed by the cattle should immediately be stopped.

You can read more details on feeding rained on hay here, here or find a forage testing lab here.