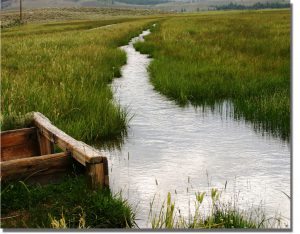 Microbial water quality standards are based upon indicator bacteria – fecal coliform or Escherichia coli. It is assumed that these bacteria can “indicate” the presence of pathogens, and associated human health risks. Pathogens of concern in rangeland streams include Cryptosporidium parvum, Salmonella, Campylobacter and Escherichia coli O157:H7. Microbial pollution sources include wildlife, humans, and livestock. In California, fecal coliform standards range from 20 to 2000 colony forming units (cfu) per 100 milliliter (mL) of water sampled. USEPA recommends an E. coli standard of 126 cfu/100ml for an average of 5 samples collected over 30 days, or 235 cfu/100mL for a single grab sample.

Nineteen sample locations were selected on streams above and below three major irrigated meadow systems. Meadow systems included Bridgeport Valley, Sierra Valley, and Goodrich Creek. Each meadow receives streamflow from surrounding mountains, streamflow is diverted to irrigate meadows for forage production, and meadows are grazed by beef cattle and in some cases cut for hay. Beef cattle numbers (animal units) for each site are approximately 20,000; 15,000; and 1,500 respectively. These sites are grazed from April through October.

About 60% of the fecal coliform observed were indicator E. coli.

There was no significant correlation between indicator bacteria and pathogens.

The probability of pathogen occurrence was essentially independent of the EPA recommended indicator E. coli standard. Pathogens were found when the standard was met and when it was exceeded.

These results indicate that water quality regulation and monitoring based upon indicator bacteria may lead to unnecessary management restrictions. Alternatively, regulation based solely upon indicator bacteria may lead to a false sense of human health protection. Given the importance of this topic, consideration should be given to water quality monitoring and standards targeting specific microbial pathogens of concern.